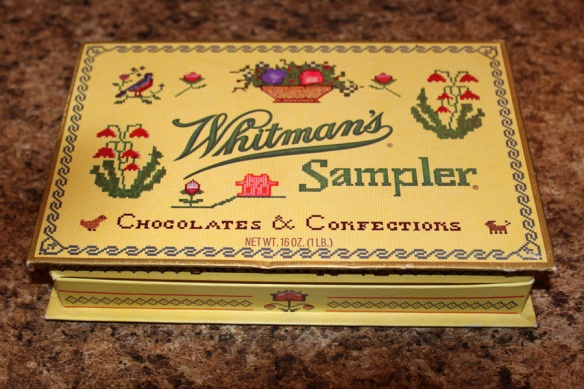 When you stop at a garage sales do you ignore closed boxes?  Do you take a quick glance and if you don’t see anything, walk out?  Do you like to open boxes to see what is inside?  Do you like to dig?

Me?  I do not like to dig deep, but I do open boxes.  It must be my curiosity.  This past weekend I saw this old chocolate candy box.  Boxes like this can hold trinkets, fabric or buttons.  This one surprised me.  When I opened the box, I found this.

Cannonbal Fragments from Bull Run.  What? An artifact from the Civil War?  If these are real, they date back to 1861.  Of course I was hesitant.  Remember, I live in central North Dakota. Central and western North Dakota were not settled until the late 1800s. North Dakota became a state in 1889.  Not many others lived here besides the American Indians until then. My grandfather came to America from Germany through Russia in 1899 when he was six months old.

Look at it.  It is definitely not a rock.  I asked the man who owned them how he knows they were from Bull Run.  He said that he used to live on the East Coast and got them when he was living there. I am still not positive they are really from Bull Run, but when I found out that he wanted only $.50 for all of them, I bought them.  I knew my boys would think they were cool.  My youngest has added them to his collections.

So would you have opened the box?  Would you buy the fragments?

Linking up to:  Would You Buy It Wednesday? at Junker Newbie