and it isn’t over yet. 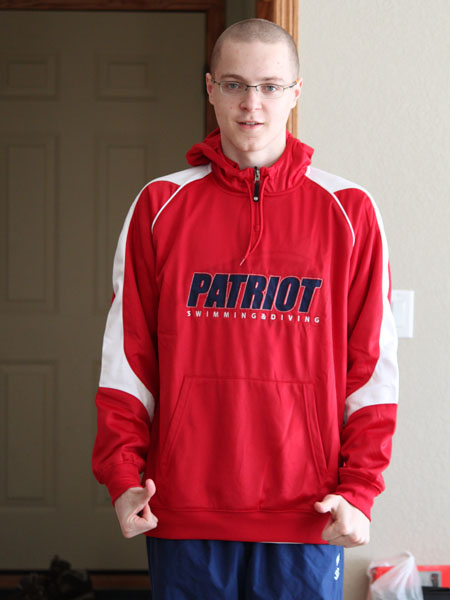 This boy had a fear of water.  Not just a ‘I don’t like water’ fear, but a deathly fear of water.  At the age of 6 months he hated baths.  Bathtime was a nightmare.  Tears and more tears.  We could not pour water over his head.  He really was scared of water.  We do not know why.  We don’t remember anything happening.  It just was. 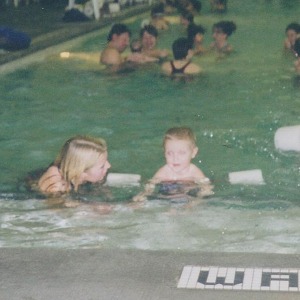 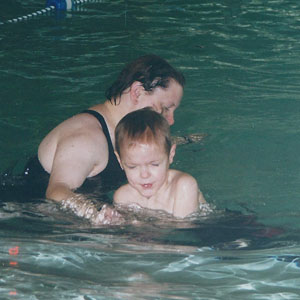 We signed him up for swim lessons at the YMCA in Boise, ID.  Month after month, I sat on the side of the pool watching many patient (a few not so much) teachers work with Z.  He was slowly, very slowly learning to go under the water.  But he hated getting water in his eyes. 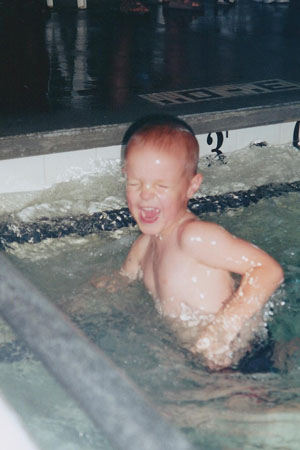 Goggles were purchased and a little progress was made.

I remember the instructors trying to get him to jump off the side into the pool.  I remember the tears, oh so many tears.  Many of them mine. I remember calling Big M on the phone about a year into lessons.  “I can’t do this any more.  Maybe we are crazy.  Z will never be comfortable in the water.  I can’t keep torturing him like this.”  We took a month off and decided to try again. 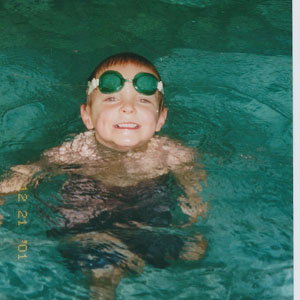 I almost pulled him when his instructor was Russ, an old Navy retired man.  I thought it would never work. I was wrong.  That man, over the course of 3 months, got Z to swim through his legs.  He was tough, but Z responded.  He still remembers Russ and even has said, “If Russ could see me now.”  Sadly we lost contact with Russ.

Z still didn’t like water in his eyes, but he actually could swim about 20 yards.  We had accomplished our goals.  He was uncomfortably comfortable with water.  However, he still would not jump in the deep pool. So that was a new goal.  Part of the problem with the deep pool was that it was so cold.  So we bought him a body suit or two and he started working in the cold pool. 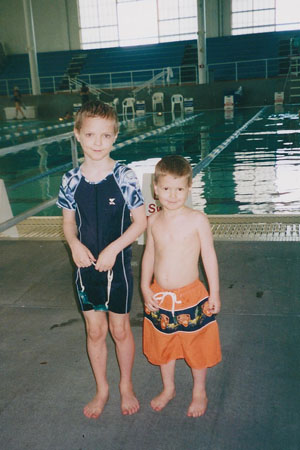 Time passed.  Many times we thought of quitting, but by then JV was ready to learn to swim so if he was going to learn, Z might as well take lessons too.  I will never forget the day he jumped off the side of the cold pool into the deep 13 foot pool.  Our hearts swelled with pride. He was probably 9 years old.  He could swim ok.  We now felt he could save himself if he ever fell in.  We stopped lessons for a few months.

About 6 months later, we moved to Bismarck, ND.  Since we homeschool, I wanted the boys to do something physical.  We decided to try swim lessons again for the exercise. Although Z still hated water in his eyes, it was obvious that he could swim better than where the lessons would take him, so we signed him up for Club Swim Team when he was almost 11.  Again just for the physical exercise. 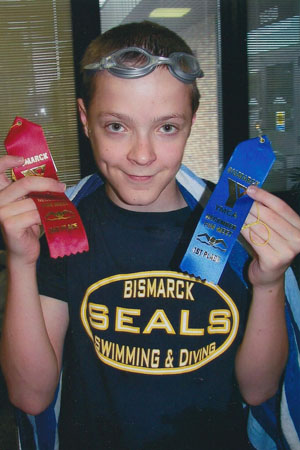 He hated getting up on the blocks, they made him nervous, but he finally decided to try a fun meet with just the club.  He took 1st in backstroke and 2nd in the 50 yard free.

Some where along the way he started to enjoy swimming, or at least as he said, “I love to swim, but it would be so much better if I could swim in the air.  I hate getting wet.”  I remember one of his first official meets.  He jumped in at the start and his goggles fell off.  He finished the race, very slow because he couldn’t see, but he finished.  It wasn’t until he came to talk with his Dad and I that the tears came. Our hearts broke.  He hated it, but he didn’t quit. Pride for his determination grew. 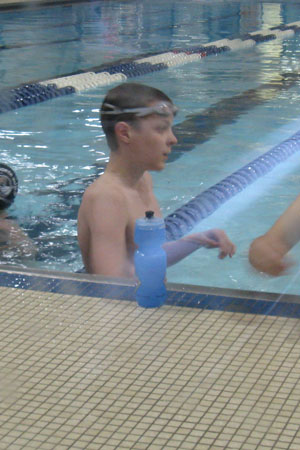 By 7th grade he could have joined the High School Swim team, but he was not ready.  So that year he swam in Silver Advanced at the YMCA with all girls and only one other boy.  (By the way, that boy, AT, placed in top 8 in the 200 and 500 free this weekend.)  Z was going to do the same thing the following year, but a young man, who had been a great swimmer, took over teaching that group at the end of the year.  He saw potential in Z and somehow convinced Z that he was ready for the High School Swim team. 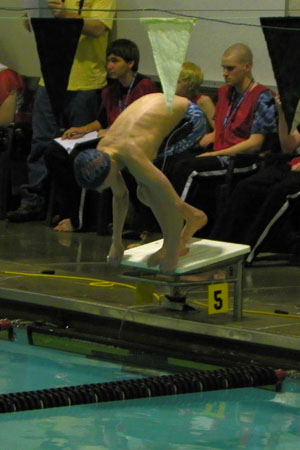 As an 8th grader, Z loved being a sprinter.  I still think it was because he was in and out of the water.  He actually qualified for state in the 50 and 100 Free.  He swam the Prelims but didn’t make it to the second day.  However, he was able to swim in one relay. Only top 16 swim the second day along with 3 relay teams. Amazing for an 8th grader, let alone one that didn’t like to get wet. The team, who had placed last the year before, took 2nd to the last.  It was progress.  However he had a taste of winning.

I will never forget last year on his birthday, two weeks after swimming was over and he was expecting to be out of the water for another 4-5 weeks, he came running in to the room.  “I just got the best birthday present ever. I just got an email that we can start swimming next week.  Woo-hoo.”  Yes, this boy now loves to swim. 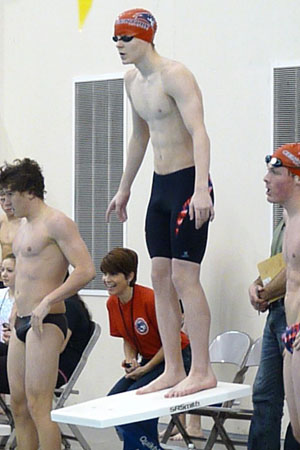 So this year in 10th grade, his goals were higher, place in the top 8 and beat a cross town rival, JR, who was graduating. The team had goals to win State.  So this past weekend was State.  He qualified in all events except the Breaststroke. Century’s team is shy on sprinters, and Z still loves sprinting. He swam the 50 and 100 Free again.  Going in he was ranked 7th in the 50 and 12th in the 100th. 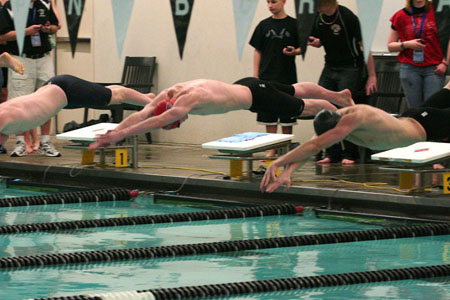 I think this boy is no longer afraid to dive in the water.

Prelims on Friday were amazing.  95% of the team swam their personal best times in their events. That is not a common thing to happen.  Z moved into the 6th spot in the 50 and 6th spot in the 100 free, doing that by dropping 1.6 seconds to a 50.06 and beating his rival, JT.  He achieved his personal goals.

Yesterday Z’s team, and three other teams were all within 26 points of being able to take 1st place.  That is unheard of.  Normally one of the teams runs away with the Meet. The Meet was amazing. 1st place was continually shifting between the teams.  Many of the boys had amazing swims.  Z took 6th in the 50 Free.  He had hoped to break the 21 second mark.  Didn’t quite do that.  He took 8th in the 100, but dropped time again to 50.01.  He did not achieve breaking the 49 seconds by a fingernail, but he swam his best ever.

Z also anchored the 200 Medly relay with a 22 second time.  They took 3rd, but broke a school record.  Z was lead off in the last relay, the 400 Free.  All 4 teams were within winning the Meet.  Anyone one of those 4 teams could win.  It all came down to this race.  For the third time this weekend Z swam his 50 second 100 free leg.  Keep in mind he had never swam faster that 51.63 before this weekend.  The team swam their best time, breaking the school record for that relay, but took 4th in that race.  And the best State swim meet was history.  Fargo North and West Fargo tied for first at 286 points.  Minot took 3rd at 284 points, and Century, in spite of most of the boys having their best swims, came up short with 282 points.  Only 4 points separated all 4 teams.  What an amazing finish to an amazing all around meet. 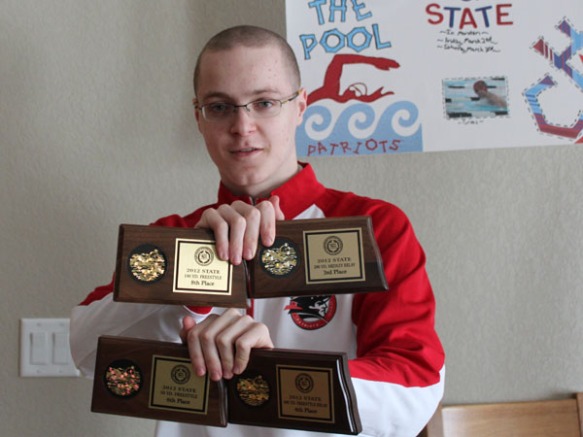 So this boy has had an amazing journey in the water.  He still does not like getting wet, even though he does twice a day.  (During the season they get up at 6 a.m. to either swim or do dryland training, they get back in the water at 3:45 to swim again.  Every week day and some Saturdays. At their peak I believe they swim 14,000 yards a day.) 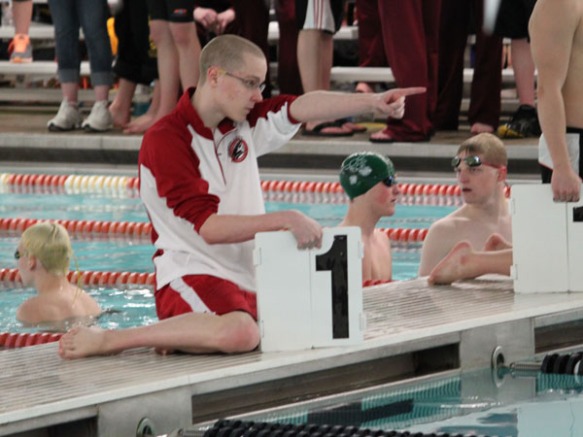 He still turns away from the water when he is counting for his teammate in the 500, so water doesn’t get in his face.  However I would say he is comfortable in the water, can jump in the pool and could save himself if he ever fell in.

Today this boy is a little sad, wondering, if I had only….  He said, “It is actually harder to lose by 4 points then by 50 points.”  Even though he had the best swims of his life and the team, as a whole did better that ever before…Even though there should be such celebration…there is just a little quiet reflection.  All due to 4 little points.

The best part of this whole journey though…it isn’t over.  He has two years of high school swimming left.  Not one boy is graduating this year. That means everyone is coming back.  Century will be ready.  They will be in contention next year for the State title. And this boy will discover more abilities than he ever thought he had.  He will have more highs and lows.  He will achieve new goals and laugh, and probably cry, a few times along the way.  It will go fast. His Dad and I will be there cheering him on and encouraging him every step of the way. We wouldn’t miss it for the world.

Life is good.  What a journey.

5 thoughts on “An Incredible Journey…”