One of the things in my square wash tub was several boxes of men’s handkerchiefs.  Brand new still in the boxes. Do you remember a time when all men carried handkerchiefs?  Nobody calls them handkerchief now; they are hankies.

I remember ironing my Dad’s “good handkerchiefs”.  He had hankies he used on the farm that were red, but his white, good hankies were for when he went somewhere including Sunday church. So on wash day we ironed Dad’s handkerchiefs.

Here is a close up of some of the boxes.  My favorite is the bottom, right corner, more because of the cover on the box than any other reason.  I love old graphics from the mid-century.

One of the boxes was women’s handkerchiefs with 3 other lady’s hankies tucked in the box. Those in the box are just gorgeous. 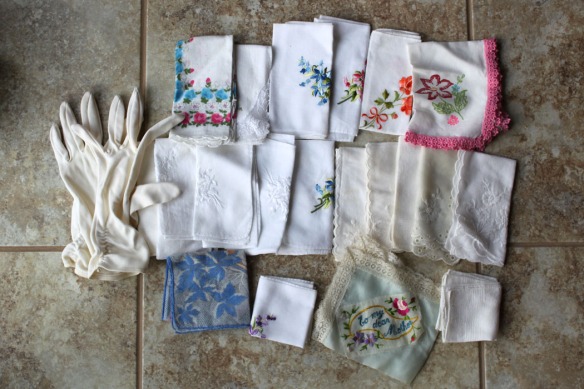 I also won a box of women’s hankies at an auction.  It held a women’s pair of white gloves too. No, I don’t want to go back to those formal days, but sometimes I wonder what we have lost by becoming so casual in our dress and actions?

Do you collect handkerchiefs or other linens?